A brain aneurysm is a bulge or ballooning in a blood vessel in the brain. It often looks like a berry hanging on a stem.

Most brain aneurysms, however, don’t rupture, create health problems or cause symptoms. Such aneurysms are often detected during tests for other conditions. 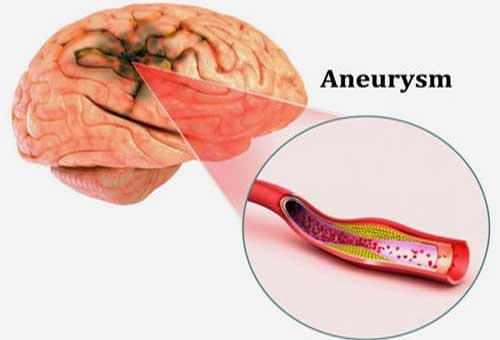 An aneurysm appears when the wall of an artery weakens, resulting in a huge bulge. This bulge has the potential to rupture, resulting in an internal hemorrhage. Aneurysms can happen anywhere in the body, although they’re most prevalent in the brain, legs, aorta, and spleen.

Aneurysms have no symptoms and are not perilous. Some, however, can burst at their most severe stage, resulting in life-threatening internal bleeding. High blood pressure and atherosclerosis are the most common causes.

Infections and certain wounds can also result in aneurysms. Genetic conditions or congenital disabilities can also contribute to the aneurysm.

Swelling and pain are common symptoms of aneurysms that form near the body’s surface. It’s also possible that a big mass will begin. Aneurysms that have burst anywhere in the body might cause the following symptoms: bruising increased heart rate, pain, dizziness, or lightheadedness

The diagnostic methods used to discover arterial damage are frequently dependent on the problem’s location. A specialist, such as a cardiothoracic or vascular surgeon, may be recommended by your doctor. To identify or locate blood vessel abnormalities, CT scans and ultrasound technologies are commonly employed.

The aneurysm’s location and kind usually determine treatment. An endovascular stent graft, for example, may be required to repair a weak region of a vessel in your chest or abdomen. Medications for high blood pressure and excessive cholesterol are examples of other treatments.

Your privacy is important to us. We want to be sure you know how and why we use your data. This also includes how we use all the cookies. Please read carefully our privacy policy in detail before clicking Accept.

This website uses cookies to improve your experience while you navigate through the website. Out of these, the cookies that are categorized as necessary are stored on your browser as they are essential for the working of basic functionalities of the website. We also use third-party cookies that help us analyze and understand how you use this website. These cookies will be stored in your browser only with your consent. You also have the option to opt-out of these cookies. But opting out of some of these cookies may affect your browsing experience.
Necessary Always Enabled
Necessary cookies are absolutely essential for the website to function properly. These cookies ensure basic functionalities and security features of the website, anonymously.
Functional
Functional cookies help to perform certain functionalities like sharing the content of the website on social media platforms, collect feedbacks, and other third-party features.
Performance
Performance cookies are used to understand and analyze the key performance indexes of the website which helps in delivering a better user experience for the visitors.
Analytics
Analytical cookies are used to understand how visitors interact with the website. These cookies help provide information on metrics the number of visitors, bounce rate, traffic source, etc.
Advertisement
Advertisement cookies are used to provide visitors with relevant ads and marketing campaigns. These cookies track visitors across websites and collect information to provide customized ads.
Others
Other uncategorized cookies are those that are being analyzed and have not been classified into a category as yet.
SAVE & ACCEPT